3D Settings >Adjust image settings with preview > Check Off > “Use My Preference Emphasizing” and move slider to Performance. Click Apply.

If set to “Use The Advanced 3D Image Settings: 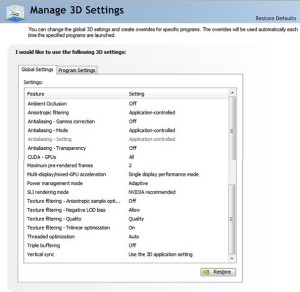 
If Set To “Application Controled” use in game video settings to adjust your gameplay.

“Maximum Pre-Rendered Frames” – Change to 2 or 1, might help with any video lag issues.
(System prerenders only 1 frame instead of 3, results in less game stuttering)

Power Management Mode: Set this to “Prefer Maximum Performance”.
If you have a top of the line card, no reason to settle for anything less.

Why 60 FPS? To combat any low dips in fps during game play. IF your playing 60 fps and your fps drops to a low of 45 fps your still playing smooth. If your playing at 30 or 45 fps and your low dips into the 20 or lower you will begin to stutter and experience jerkiness. Most competitive players even with optimal pc hardware play on the lowest possible game settings with low resolution to gain the highest fps which will give them the edge over opponents. Most competitive players have the hardware to run the highest game settings, most are not interested in graphics quality, competitive players are looking to win. Speed, aim, experience and fps is the edge they will have over you.

Your stuttering, lagging out even just slightly, everyone around you is skipping, stuttering all over the place, you cannot move, aim or adjust properly. Your opponent ahead of you is not lagging, running smooth, in his gun sites YOU ARE NOT “skipping”, he pulls the trigger and you are dead. He wins the gun battle.

How To Show FPS In Game:


How To Improve FPS?

FREE Bottle Of EJuice With Orders Over $15 With Mount Baker Vapor!

Texture Quality – Medium or Low > has an impact on the proper display of the terrain, objects & textures and that has to do with visibility & player detection. Upping the texture quality will result in, well, sharper textures. Changes will not take effect until you restart the map.

Shadow Quality – Medium or Low. Impacts FPS The higher you turn up the setting, the smoother colors will blend into each other. Objects and terrain covered by shadows will also look much better. Overall, this creates a softer picture.

Mesh Quality – Medium or Low > unless you are flying air vehicles. There is no benefit to infantry above medium and you’ll lose 15-20-30 frames if you go to high or ultra. (Air Vehicles – lower Mesh settings decreases the range of displaying spotted targets on your 3D Hud, most important for Jet/Chopper.)

Terrain decoration – High > On low the grass is not tranparent (harder to spot an enemy hiding in tall grass), on low or medium “decorations” have the “pop-in” effect like the one described under terrain quality.

AA Deffered – OFF or 2x. HAS A HIGH IMPACT ON PERFORMANCE WHEN ON.

AA Post – OFF > This form of Anti Aliasing has a low performance cost but adds visible blur to the image.

Anisotropic filter – 8x or 16x > Has a low impact on performance, but textures in the distance are clearer.

Ambient Occlusion – OFF > DRAMATIC IMPACT ON PERFORMANCE & FPS. HBAO is the highest FPS hog. SSAO is not any better. RECOMMENDED TO TURN AMBIENT OCCLUSION OFF.


Disable All UI Overlays, INCLUDING The Origin Overlay.
Helps with any sluggish, slow responsive mouse lag problems during gaming. Also stops the annoying beeps, and Origin chat messages when your friends logon to Origin/Battlelog. Which can contribute to FPS drops. How to check & disable Origin overlay

Default = 70. Battlefield 3 uses vertical FOV. FOV determines how much of your surrounding area you can see without turning. A higher field of view (FOV) puts more work on your GPU & CPU, which effects FPS, so try lowering your field of view down. Mine is set at 65, but I’m using a 1920x1080p monitor resolution. My FOV is sort of zoomed in a slightly at 65, larger view, easier to see a head of me and slightly to left and right. To high or to low can also make it look distorted.

Only recommend if you know what you are doing.

Your video card. Again, only if you know what you are doing.

Try disabling it in your BIOS. Have heard from others (I’m an AMD guy) “There is almost no game that benefits from HyperThreading (HT). Disabling HT actually increases your FPS a bit and secondly removes additional microstuttering in BF3. I have to say that BF3 is the only game that really sucks with HyperThreading”.