Looking squeeze out a more frames per second in Battlefield 3? Tips below will help gain a few more fps when playing Battlefield 3. Results will vary based on your computers overall running performance and the hardware in your computer. BF3 is a very advanced game, very hardware intensive, really pushes the “envelope” on most graphic hardware AND cpu. Without the required “balanced” pc  hardware, you will have a very difficult time running this game on your computer. “Balanced Hardware” = having a expensive video card for example, with a sub-par cpu will “bottleneck” your performance, or a expensive cpu with a low end video card. More on “Bottlenecking near end of this article.

Recommended System Requirements, for “recommended” are now the minimum hardware you now need to run BF3 effectively,, my opinion. Minimum & Recommended system requirements were posted before game was officially launched back in October 2011. (My own honest opinion.) BF3’s numerous game patches and 5 expansion map packs have now increased the actual posted pc requirements to play this game smoothly. BF3’s on line multiplayer gaming now kills most dual cores, quad core is needed as entry level processor. Dual cores might be able to run certain maps, but high out door texture maps, 64 full player maps will be a huge struggle. BF3 needs a good video card combined with a good cpu (Quad Core at least). Your choice of cpu is more important in BF3, with your graphics card following right behind in this game.

Your computer in general needs to be running well also, no CPU spikes from known or unknown software, hardware running clean and cool, etc.

Can Your Run It?

Use the link above , and use the drop-down menu and choose Battlefield 3. Site uses Java, run the Java App when prompt.

“System Requirements Lab looks at your computer’s hardware and system software to determine whether or not your current system can run a product. Each of your computer’s components is evaluated to see how well it meets the minimum and recommended requirements for specific products. Recommendations are made on how to update or upgrade each component which does not meet the listed requirements.”

Can Your Run It? – AMD Phenom x4 BF3 Score Above

http://www.systemrequirementslab.com/cyri – another similar site as “Can You Run It”

My BattleLog ID: SledgeHammer1945
http://battlelog.battlefield.com/bf3/user/SledgeHammer1945/
Have not played very much since 12-10-12. Played since release date back in October 2011. Had a good time, especially when using Mumble voice between members, met a few good people and players, ran a server for several months, then needed a break from it. I burned myself out of it basically. Haven’t been able to get back into it since then. Played a few games here and there since, but not like I was. 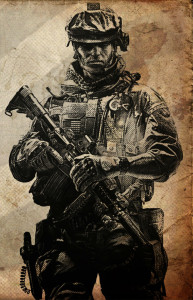 I ran Battefield 3 on this Phenom Quad 3.2 core with a base GTX 560 at 1920 x 1080p screen resolution. Smooth as butter for 11 months straight on BF3’s high video game settings with a few tweak adjustments listed down below. Average FPS of 60-95. “Smooth as butter”. Full BF3’s Ultra settings knocked me down into the 40-66 fps range, still smooth for me, but ran high settings full time.

Overclocking cpu alone results in a higher fps increase than overclocking the video card. Overclocking cpu to 3.9 Ghz increased fps by 8-12. Max overclock on the card increases fps by 4-6. Overclocking both cpu & gpu gave me about 10-14 more frames per second. The Asus GTX 560 has been a great card, it is “entry level recommended” base card for BF3. What benefits the game performance on this system I truly believe is the Quad core. Yes it’s just an AMD, but for the price, gets the job done.

With the AMD Phenom x4, overclocking the North Bridge frequency to ~2600Mhz (default stock at ~2000Mhz) resulted in a huge performance boost, and increased temperatures. Results in faster data transfer between many components. This is only benefits the AMD Phenom x4 cpu’s. Found in Bio’s, might see as CPU->NB Multi or NB Multi. Takes increasing the NB voltage a bit. DO NOT over-clock your hardware unless: 1. – you have the proper cooling, 2. – monitor temperatures, 3. – you know what you are really doing, and 4. – enjoy risking your computers hardware over playing a game.

Also with the 1920x1080p screen resolution, larger screen, I ran with BF3’s 3D map open, en-larged so I could see enemy fire, “Q” spotted enemies and there locations. My screen is large, and got use to having the map zoomed large on lower left of screen, it did not bother me, got use to it. AND USED IT!

On the high terrain maps like Caspian Border, Teheran Highway, Gulf of Oman I seen a FPS drop in areas maybe 50-75 fps range, and at times it’s as high as 85 on same maps. 1920x1080p screen resolution and a 1 GB video is pushing the limit. Still runs smooth, I haven’t experienced and any jerkiness or any stuttering with BF3 on any map.

64 full player sever maps in general are hard on “FPS”, frames per second. The server can be a big factor in the end users FPS, and it’s more prevalent on weak – underpowered servers. If your computer is under specs, or having problems playing in general try the 32 player servers.

Quad core cpu & a decent video graphics card will run the game very well provided there is nothing else within your operating system interfering, or using high resources while playing the game.

Update:
4-28-13, recently upgraded CPU, GPU and motherboard. AMD FX 8350, Asus GTX 660 TI and ASRock 990FX Extreme9 motherboard. Full BF3 Ultra video game settings. HBAO ON, AA x16, Motion Blur off, Vertical Sync off at 1920x1080p screen resolution = BF3 75-100 FPS. AMD FX 8350 running at 4200 Ghz, GTX 660 TI stock speed. Frame rate, and video quality does make a difference. Video clarity is much more clear on Ultra game settings. First game I played with these upgrades, seemed like I was making kills very easily than before, moving much quicker for advancing and getting by death shots or winning one on one gun battles much easier. And I have not played in a few months either. The AMD Phenom 3.2 955 BE and the GTX 560 did a great job on High game settings. The upgrades above just put me into full ultra settings at 75-120 FPS. Computer hardware does make a huge difference!

If you are looking you squeeze out a bit more FPS, keeping reading on below. FPS increase, smoother game play from the tips below will be dependent on your computers hardware, and how well your operating system is running. Trust me, I spent year and a half on BF3 since release date, I have tested and tweaked settings individually to find my sweet spot with the Phenom and GTX 560 in regards to smooth game play, good graphics with showing a boost in FPS.

In most cases running the most updated video graphics drivers for your video card will give you the best performance. Some might experience better performance with older drivers, you will have to test and experiment driver performance.