Customer came in yesterday with a Asus G72Gz gaming laptop. Stated he believed his dc power jack had a short and was broken. Well it ended up not being the dc jack, but something else much more major. Customer then proceeded to tell me he left the house, left the laptop plugged in and came home later. Stating he thought there might of been a power surge while he was gone, laptop would not turn on.

Well a possible “power surge” and a definite electrical burn smell coming from back of the Asus G72Gx laptop is not a good sign at all. Decided to take apart just to see. Below photos are what I found and suspected a D.O.A, dead on arrival motherboard was confirmed. 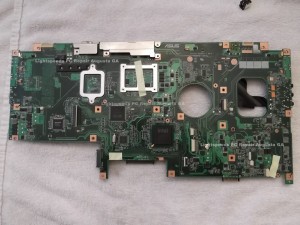 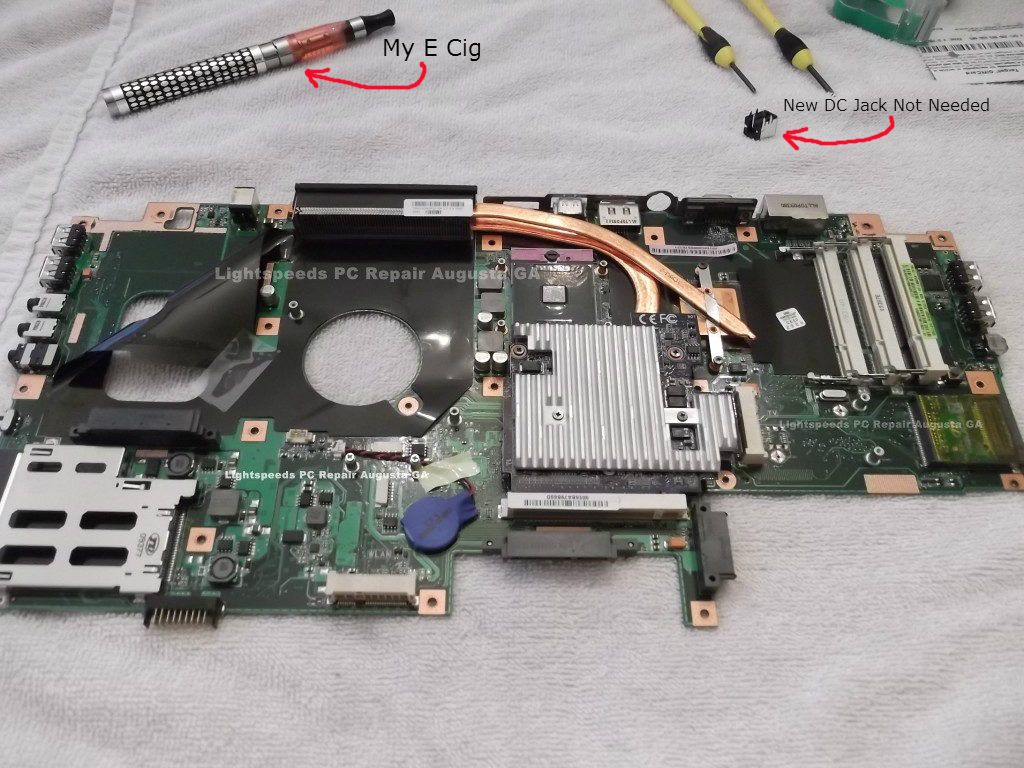 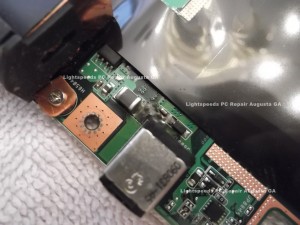 Do you notice something in the above photo? Motherboard is burned & melted. 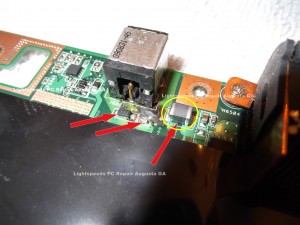 3 Red Arrows:
– 3 other circuit chips damaged on the burn also

I believe the board was heating up, melting, burning from inside the PCB of the motherboard itself.
Click photos for larger view

“D.O.A.” – dead on arrival as suspected. Internal circuits are shorted out and burned, un-repairable damage. $1300+ nice gaming laptop now turned into a paperweight. This is what can happen when the dc power jack inside of the laptop has a short or loose connection. 4 photos above, you can see I have a new dc jack ready to solder & install, not needed now, for a new dc jack on this laptop now will not help it now.

Customer did say he “believed there was a power surge after he arrived home”, not really sure. But this Asus G72 motherboard is done – defective.

I asked customer if anyone else recently worked on or repaired the dc jack. He stated “no” has never been open since he purchased the laptop new. On both sides of the motherboard around the dc jack area there was a very noticable excess of solder “flux” especially on the non burned side of board around the dc jack. Solder flux is great for de-soldering & soldering, but everyone that does soldering knows to clean any excess solder flux off the circuit board real good. I use 90% rubbing alcohol and an old toothbrush to clean both sides of the dc jack after a dc jack replacement. Leaving excess solder on the circuit board can be corrosive, damage the board within time, especially acid based flux. Asus was a bit sloppy here on leaving this heavy flux around this area. This was not dried up old solder flux, it was still sticky probably from the heat of the burn. Very surprised and shocked to see this solder flux left by Asus on there motherboard, it is sloppy workmanship for one, AND might of caused this short, burned out motherboard on this G72Gx laptop.

So I’m guessing at the power surge, laptop was left plugged in, with no surge protector that cause the power short, burn on the motherboard. Year and a half old expensive laptop out of any type of warranty. This laptop just might of burned the house down if gone for a period of time.

There could very well be some type of fault in this motherboard. Since this one Asus G72Gx above in this article write up came, there have been 2 other Asus G72Gx models came to me for DC Jack repair. I found the same similar burns on these 2 other Asus G72Gx motherboards. And another call from another computer repair shop that found this article, asking me “how did you repair it”,,, I did not repair, nothing I could do for it. Asus will not sell any of there components to anyone. Asus wanted the owner to send laptop back to them to replace, at a very high out of warranty cost from Asus.