If you are not familiar with the ipads wifi antanna, the location of the wifi antenna, removing the iPad 2 digitizer without tearing this antenna can happen very easily.

The iPads wireless antenna is attached to the backside of the touch screen digitizer by adhesive tape. Located on the right side between the iPads “Home” button and right corner as if you are holding the iPad in front of you. For future repairs, knowing the location, applying enough heat, prying up slowly to get a peak under the digitizer in this area, and being very careful in this area is the key to removing digitizer without ripping the wifi antenna out.

If you ripped ANY part of this wifi antenna while removing the ipads digizer, it is advised to replace it as your iPads wifi will not work properly. Signal strength might be weak or not work at all.

This guide below is how to replace the wifi antenna with the glass digitizer already removed.

The iPad 2 model, has a particular area to be careful with when removing the digitizer, the area near the upper right corner, near the volume, mute buttons. The power ribbon cable is one cable that handles powering iPad on, off, sleep, volume, mute functions. One very small section of this ribbon cable is exposed between the frame and digitizer, if you rip this very small fragile cable your iPad will not power on. On the iPad 3, and iPad 4 Apple protected this power cable area with a small protective plate covering & protecting the “power” ribbon cable. Replacing this power cable is one pain in the butt! VERY small screws, parts and ribbon cable to handle.

Removing the iPads digitizer without cracking or scratching it is an almost impossible job also. All the iPads I received have cracked digitizers, so damaging the digitizer any further on removing is not a concern. The wifi antenna’s between the iPad models are different antenna’s, but the location is the same on the ipad 2, 3 and 4. Even partially ripping this antenna will damage the antenna. If you slide your “spudger” tool through this area between the digitizer, frame and wifi location, you will rip the wifi antenna for sure!

Problem is, for most attempting to repair there cracked digitizer themselves and not realizing you ripped the wifi antenna or cellular data antenna near top. Then sealing new digitizer in place and your iPad does not turn on (ripped on off power cable?) or your wifi does not work. How good, or what use is the iPad without wifi, internet connection? It has no network cable jack for internet connection. Have learned to test these functions BEFORE sealing the digitizer down. Removing the new digitizer off iPad in one piece again will be very difficult IF you sealed it down. You’ll be in for another new digitizer again.

The iPad 2 wifi cable component is very cheap, you can find on ebay for $3-$7 USA depending on the iPad model. So at that low cost it is a good idea to order one if you intend on repairing your front panel touch screen digitizer. Best yet keep a few extra around especially if you are doing these type repairs for customers. iPads wireless antenna are slightly different between the iPad models, you need the correct wireless antenna for your model iPad.

Cellular Data Antenna’s:
Photo To The Right: the cellular data antenna’s (model specific) are the 2 black long bars that are on the left and right side of the front facing camera.

If you know what you are doing, and what the cellular data antenna’s look like and how to get by this area it is not that difficult. But for a first timer attempting to remove the iPads digitizer you can rip these cellular data antenna’s out easily. First iPad with cellular antenna’s I ripped out and had to replace the cell antenna’s, have done 300+ iPads since, never ripped one out again. Trouble is once you get by, free up digitizer on one antenna,,, you have a second one to free up, get by on other side of camera.

Give “Tobacco Blaze and “Buds Blend”E-Lquid a try!

First off, this is a guide and by no means does Lightspeeds Computer Repair take any responsibility in the dis-assembly or repair of your iPad by this guide & photos, and you damaging the iPad. For it is a very delicate, meticulous repair. Dis-assemble & repair at your own risk.


Make sure your iPad is completely POWERED OFF. Not in standbye, not in “sleep” mode, POWERED OFF completely BEFORE removing digitizer and disconnecting ANY cables or connections inside of the iPad. Disconnecting, or re-connecting the lcd screen cable when iPad is not fully powered off, can blowout the back-light filter which is a circuit on the logic board. Producing a permanent dark, dim lcd screen.

Removing this cable is easy, but one end of the wifi cable runs under the iPad 2’s logic board, as you will see in photos below. I thought the iPad 2 logic board was going to have to be removed, but there is a much easier way without having to remove the logic board. 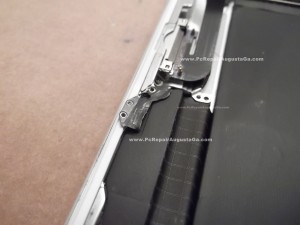 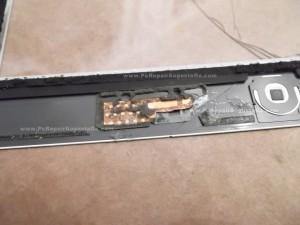 2 Photos above show the damaged, ripped iPads wireless antenna cable.
Photo above right, shows the backside of the iPads glass touch panel, where the wifi cable is attached to backside. The wifi antenna sits just to the right of the ipad home button on iPads models 2, 3, and the iPad 4.On removing the iPads glass digitizer, the wifi cable ripped separating into 2 pieces, one on the iPad frame, the other on glass touch screen bezel area. ANY tears or partial rips in ANY area of this antenna, you’ll need to replace it if you want your wifi working. It is important to test your wifi and digitizer functions BEFORE sealing the digitizer down in place.

Above left photo, I already removed 4 very, VERY small screws securing this end of the cable to the iPads base frame. You will see the other end of this wifi wireless cable running to, and under the iPads logic board. Remove these 4 very small antenna screws, do not lose these screws. 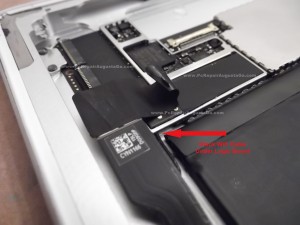 Shows the iPads wifi wireless cable running under the iPad logic board.

You’ll see blacktape, carefully peel this up & off. Partially peeled up in this photo.


2 Photos Below,,,
Peel the black tape off, the 2 cables you see in these photos you do not have to remove.

The silver part you see in photos below is just a cover, you can carefully, CAREFULLY pop the silver cover up and off. You can actually pull up carefully on that black tape area of this cover with your fingers,, carefully. Be careful you do not damage circuits under this lid while removing! Removing this lid will then expose the backside of the wireless wifi board. 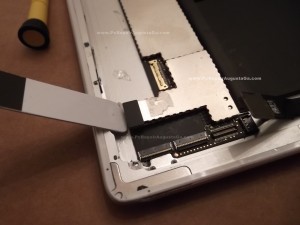 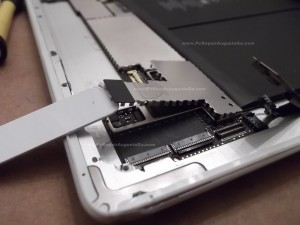 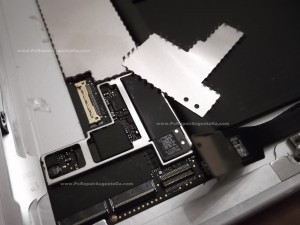 Silver cover popped off, and removed

Photo on left, this is the backside off the iPad 2 wireless, wifi board. The ipads 2 wifi board connects into a socket straight down, on the logic board.

There is a small notch in the upper corner, the board connector is on this end.

With a small tool, carefully, VERY CAREFULLY pop it slowly upwards, straight up.

DO NOT stick pry tool in very deep, just enough to grab the small IC board from the farthest end from home button area to disconnect & pop upwards. Actually best to use corner of a credit card rather than a precision screw driver or metal. This small wifi board is held in place by it’s connector socket on logic board, and some sticky rubber on the other end also. It will popup out of it’s socket, straight up. (Next Photo)

You damage this wifi IC board you’ll be in trouble for they are really not available. Maybe eBay used. And Apple does not sell them to anyone.

Here is the iPad 2 wifi wireless board disconnected from logic board. You can see the socket in this photo, it is straight down. To re-connect it, line it up and push straight down. 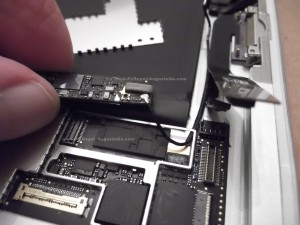 And here is the other end of the wireless cable. Cable runs under the small silver trim, which you can see and remove the cable easily.

Cable is plugged into the small socket on board as you see. Pull the cable straight up & off to disconnect it from board. Next photo below, 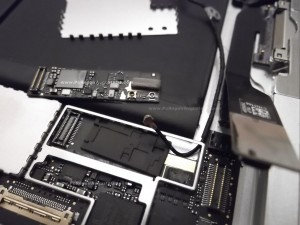 
The antenna cable runs under a wider black power connector cable leading to the logic board area. Hold this cable down with your finger and carefully pull the antenna cable out from under it. If you have not already, remove the 4 screw holding iPads antenna to the frame. DO NOT lose these tiny screws.

Your now ready to install the new iPad 2 wireless wifi cable. From here it very easy, just do all in reverse.

IMPORTANT TO TEST WIFI BEFORE SEALING DIGITIZER BACK IN PLACE!

How To Test Wifi Antenna & Digitizer

Very important to test your wifi & new digitizer BEFORE sealing the digitizer back in place.

Without pulling the paper backing off the 3M tape on the digitizer or frame, carefully flip the glass digitizer in place on the iPad. Power the iPad up and check your wifi settings and nearby networks. Adhesive tape or adhesive backing on the wifi antenna is only needed for the digitizer to hold down the iPads digitizer so your home button, mainly on the iPad 2 and iPad 3 makes contact and works properly. (iPad 4 has a ribbon cable for home button functionality)


IMPORTANT:
Make sure the new wifi antenna is connected firmly into same socket as the bad antenna that was removed disconnected. Connection must be seated in socket good. Also make sure the wifi board is connected down into logic board firmly, and good connection to the board. Make sure the very small 4 screws are back in place that anchor antenna to the iPads frame.


If you are showing a greyed out wifi setting, chances are that wifi board is not connected firmly into board socket. Check wifi antenna connection to wifi board also

If you wifi is searching but finds no networks, chances are your wifi board is connected properly, check antenna connection to wifi board. Or you have a new bad antenna.


Still having problems with wifi after replacing, and checking connections, try a “Hard Reset” on the iPad.

An instructional video provided below: